South Dakota Artists Alliance
a partnership of artists working together to inspire and nurture the creative spirit through education, community involvement and celebration of the arts​

One day, In the Spring of last year, I busied myself with house-cleaning. As I walked back and forth, tucked things away, the television mumbled throughout the house. Not having my full attention, though disclosing to my inattentive ears; a discussion. In and out of rooms I went… back and forth… until I heard something in the midst of all the chatter that stopped me. I wondered at the attention it demanded and the power it contained. What was it? Music – the vessel from which this music poured forth was Susan Boyle; a contestant on “Britain’s Got Talent.”
Before she took her spot on the stage, she was dismissed as a mere spectacle [a dreamer] possessing nothing worthy of praise. The initial attention she received was from those who awaited ‘a good laugh...’ and then, she sang. The cameras glanced over the audience and captured their reaction to her voice as it danced in their ears, moved them to tears, laughter, [and yes] praise.
In that speck of time I realized several things; Simple conclusions; a likening me to the Apostle Thomas who had to touch Christ’s wounds in order to believe in the resurrection. In that moment I had stuck my finger in Christ’s side, and I knew… Beauty does exist. As well, it was apparent that it was rare, yet recognizable to ‘all.’ Finally, I noted that it was threw art [music] that something otherwise invisible became real.
What a gift – to make that which ‘is’ visible to another soul. How great might the reward be – to succeed in such an endeavor?

The aim of art is to represent not the outward appearance of things, but their inward significance.
Aristotle

Stacey Evangelista resides in Sioux Falls, SD.  Drawing since the age of 4, she has steadily been developing her skills as an artist. Today her subjects are primarily the human figure, but not limited to. In 2010 Ms. Evangelista had her first solo-show at the Washington Pavilion, Visual Arts Center.
“…her work reveals a sophisticated understanding of painterly expression and a deep appreciation of art history… Through dedicated practice and independent exploration of the sheer pleasure, beauty and power of painting, she has transformed her natural talent into a facility with paint that allows her to quickly and solidly render the subjects before her with decisive energy and diverse techniques.”
Washington Pavilion, 2010

Additional work by Stacey can be viewed at 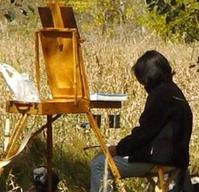