James Pollock graduated from SDSU, was drafted into the army and in 1967 through army-wide competition he was selected for U. S. Army Vietnam Combat Artist Team IV (CAT IV). Art completed by Pollock during
his assignment as an official soldier-artist in Vietnam is in the permanent U.S. Army Art Collection, Ft. Belvoir, VA. Pollock has worked at a variety of art related jobs and projects. His art has appeared on the covers and inside of many publications such as War Literature and The Arts (published by Air Force Academy), The Dakota Farmer, South Dakota Magazine, South Dakota Conservation Digest, South Dakota Outdoors, South Dakota History (SD State Historical Society), Prairie Winds and many other books and projects. He is a founding member of Artists of the Black Hills (ABH). Pollock lives in Pierre with his wife Betsy and loves to take his watercolors outdoors to paint on location. 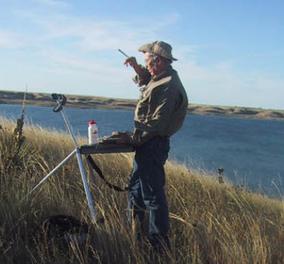 South Dakota Artists Alliance
a partnership of artists working together to inspire and nurture the creative spirit through education, community involvement and celebration of the arts​